Eve Being Funny at Lunch, and Hunger

January 23, 2009
Today at lunch (Broadway's Diner), Eve turned to me and announced definitively that she had learned what twins are called when they're not 'hi-dentical': 'eternal'.
Hunger by Elise Blackwell
I have a weakness for small, beautiful, matte-papered hardback books. While I'm reading I'm often unconsciously smoothing my fingers over the cover papers. My husband sometimes asks if the book and I would like to be alone.
The prose is spare and somehow cold in this book. Reading it feels somehow akin to walking through the frigid, snow-dusted squares of a Russian city. It makes you feel cold and sad and hungry.
The unnamed narrator is a scientist who collects plants and seeds to be stored safely and kept for posterity at the Research Institute of Plant Industry in Leningrad. His wife and mistress both work at the Institute as well. The novel concerns the siege of Leningrad by German troops in 1941, when food becomes so scarce that people are reduced to unthinkable measures in order to stay alive. 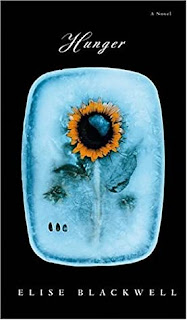 The narrator does not present himself as a man beyond reproach, which makes the story chillingly realistic. He details ways in which he acted both with bravery and cowardice throughout the 'hunger winter' and admits without melodrama that he raided the stores of grains and rice which he was entrusted with protecting in order not to starve to death. The image of him chewing on hard rice kernels with his malnutrition-loosened teeth is viscerally distrubing. He also describes notice boards where people offer to trade work, heirlooms, bodies and souls for foods -- "The bravery to survive is a ruthless one. Martyrdom leads, by its very definition, only to the cold ground".
The story is full of potent images, such as the trees in the city stripped of bark for a dubious food source, so that they are naked and skeletal. There are heartening stories of "tremendous sacrifice and honour" but also many which demonstrate, as the narrator believes, that "deprivation debases more often than it ennobles".
This is a story that provokes thought on the essential issues of what makes us human, and how little hardship is needed to strip away the veneer of civilization and reduce us to our basest instincts. Reading it in a place where food is readily available and easily wasted was an uncomfortable but rewarding experience.