What the heck kind of title is "Burt" anyway?

January 16, 2009
Don't you love how on TV shows, when people get into an elevator, they always end up alone in it with the person they're about to start sleeping with or just broke up with? When I broke up with my boyfriend in university, we lived in the same residence, and I rode in the elevator for four hours at a time -- the son of a bitch never got in once.

The last time I was at the library, I did what I frequently do, which is pick up my reserved book from the holds shelf and then wander back to check them out while scanning the shelves to see if anything else leaps out at me. I grabbed a thin paperback because of the title: "When I Was Five, I Killed Myself". I read the whole thing in bed last night, and by about the second chapter I realized I had read it already, years ago, probably when I was ten or twelve (I got it from the Lively Public Library.) I must have read it under the alternate title ("Burt"); I'm pretty sure I would have remembered this title. I love it when things like this happen.
When I Was Five I Killed Myself by Howard Buten 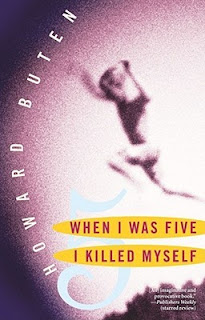 It's always amazing when an adult can capture a child's voice this convincingly -- earnest, literal, trying out expressions slightly beyond his comprehension, unintentionally humorous and often bewildered. There's something almost unbearably sad about the way 9-year-old Burton Rembrandt can express his inner life so clearly and yet has no capacity to control his acting out, which has contributed to his landing in a psychiatric facility. He spends much of his life surrounded by adults who might as well be speaking a different language, so little do they understand his prodigious imagination and crippling fears -- his primary therapist is well-meaning but largely inept, there is occasional mention of violence on the part of his father, and the letter his mother sends him while he is confined communicates nothing but extreme denial and a false veneer of inane cheerfulness.

While he is incarcerated, he relates the story of finding a kindred spirit in his classmate Jessica, and how this leads to the misunderstanding which has resulted in his current plight. While he writes his story on the walls of The Quiet Room, he also meets an unorthodox therapist named Rudyard (Buten seems to have a flair for rather baroque nomenclature), whose greatest talent is thinking like a child and then communicating with them on their level. Naturally, the mainstream administration finds this threatening, enlisting our sympathy for a different kind of outcast.

This book was quite powerful, particularly since it is short enough to be read at one sitting. I really felt like I was inhabiting Burton's world, its vividness and powerlessness, and I'm so glad I got to read it again from a more mature perspective (I'm pretty sure I understood almost none of it the first time around). Buten says in the preface that "people holding my books makes me happy". I'm happy I got to hold this one.
books 2009