I don't want to say the sleeplessness is getting to me, but I just folded a load of laundry, put a pile of dishcloths in my underwear drawer and then filled the dishcloth drawer with, well, drawers. Dinner clean-up is going to be interesting.

I used to experience restless legs syndrome only when I took certain cold medicine. I didn't know there was a term for it, just that the medicine would make me sleepy but miserably unable to actually sleep. As I got older, I would experience it every now and then if I read for a long time. I would have to stop reading and lie down, and then it usually stopped. Now, in perimenopause (not sure if that's the cause), it starts while I'm reading and continues when I lie down. It feels like there's an electrical current running through my legs and I have to keep jerking them to get the current out. It can last for hours, makes it impossible to sleep and it is extremely distressing. I saw my doctor yesterday and she gave me a prescription for something that might help. I'm trying not to get my hopes up, but at least I'm trying something.

I've been covering in the office in the mornings lately, which is absolutely chaotic, which can be stressful, but the women I work with share my screwy sense of humour and we mostly roll with things and manage to both help and mock each other. It takes me most of my shift to finish attendance (taking calls off the phone line, taking the online attendance form submissions, taking the teachers' attendance, recording everyone who came in late, calling everyone who didn't give a reason for the absence (because of Covid we have to be intrusive about the exact symptoms to keep the Covid Tracker up to date), running the final report), and then I put out fires for the remaining time. Someone came into the office a couple of days ago and said "good morning" and I said "good lord, is it still morning?". She said "well it's right on the edge" and I was like "Girl, SAME".

Today I looked up from my computer for what felt like the first time all shift and it was ten minutes past the time I was supposed to leave. This is the good news - the time absolutely flies by.

I picked up Lucy from my parents' place and came home. She wanted to go out right away, so I let her out in the back yard and started doing stuff in the kitchen. I realized she'd been out for quite a while and opened the door. She was nowhere to be found, which isn't that unusual - there's a hole in the fence to our neighbours' yard, where her sister lives, and they go back and forth freely. But she wasn't there either, which means she's sneaked out their gate and is frolicking in the hedge that's across the street from our house - she pulls this stunt once every few weeks. I went to the front door and bellowed her name. She came out of the hedge, booked it towards me and then deadass beelined past me at the front door, went back through the neighbours' gate and came back to our back door, as if I would believe that she'd never gone gallivanting.

To answer some questions from comments on previous posts: Davis's new bunny actually came to live with them because another of her bunnies sadly passed away (on her birthday, if you can believe the universe would be that much of a dick). Her first bunny (still alive) was named Slash after Slash. Then they got Axl, named after Axl Rose. When Axl died they wanted to get another bunny so Slash wouldn't be lonely. They thought they might name it Freddy Furcury. But then the new bunny came with the name Angus, which fit the theme because of Angus. Jody (HI JODY) said she would change the name if I had a problem with it. WHY WOULD I HAVE A PROBLEM WITH IT, it is incredibly enjoyable to go visit Angus and pet his furry ears and watch him hop around and then tell other Angus about it (he said "kind of looks like me, tbh" - he also texted "I'm doing Movember, I apologize if you see photos". Moustache. Oy)

I did not wear Docs with dresses when I was Eve's age. I wore button-up boots with long dresses on occasion, which my mom hated - once a woman in a parking lot at the mall said "I like your old-fashioned look, it's really cute" to me, and when I told my mom she said "maybe she was joking". Hmph. I got my first pair of combat-looking boots in university and it was the first time I had new footwear that didn't give me terrible blisters, so I liked the way they looked but it was really like my feet had finally found a home. I think I got my first pair of Docs in university, and NOW I wear Docs with dresses. Mutton dressed as lamb? Perhaps. I am comfortable with it, and so are my feet. 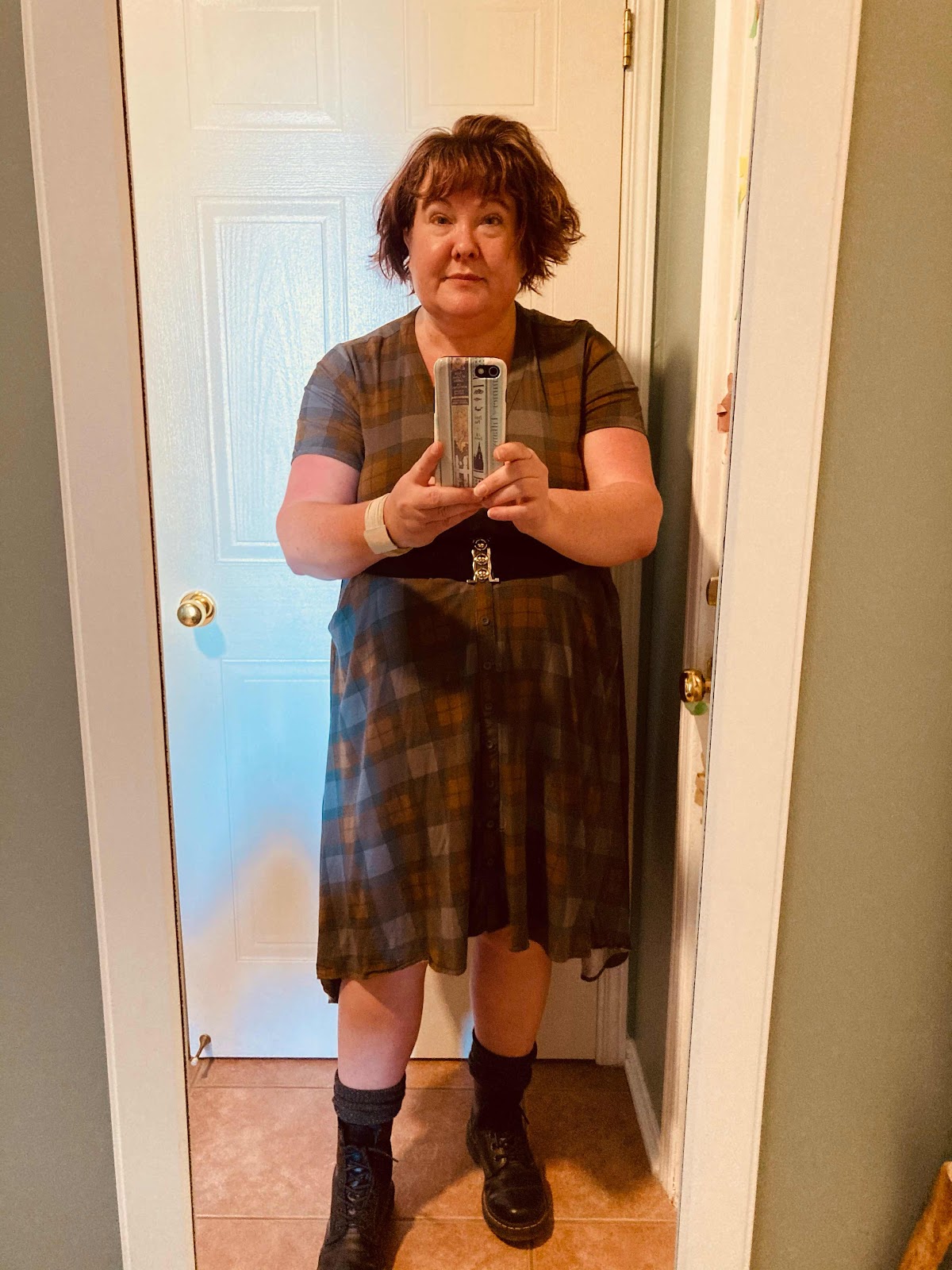 Eve is actually wearing my Docs in the pumpkin patch pics, because she left hers at McMaster, which closes some kind of delightful circle, or something. 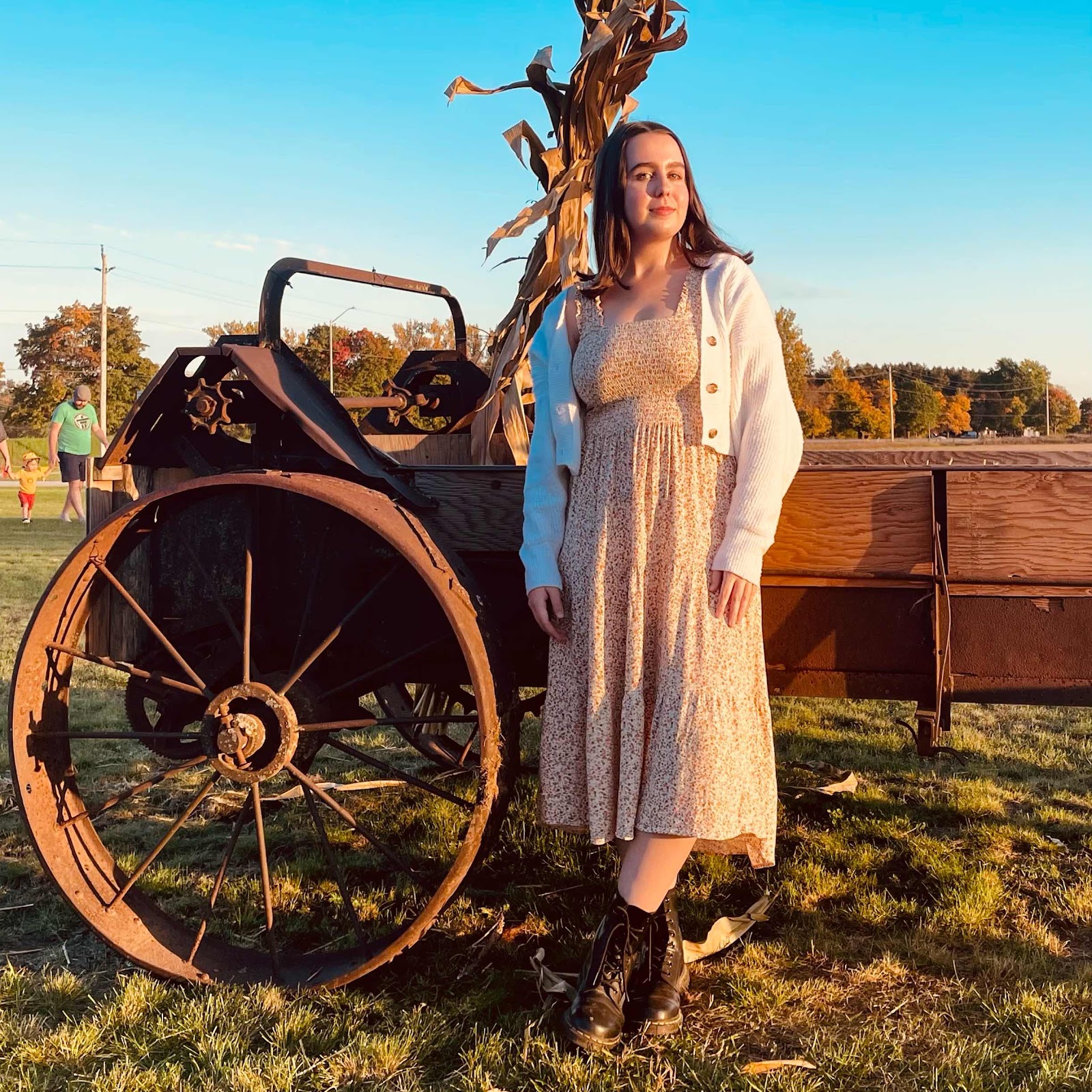 In summation, my legs are restless, my feet are happy but possibly age-inappropriate, my son is cute and fuzzy and my daughter is gorgeous. And I'm tired. Happy Wednesday!

Swistle said…
Well this was a delightful journey.

One of my friend group got terrible restless/burny legs during perimenopause and went through so! many! tests! Just In Case it was something else, and then it just...stopped. I don't actually know if that is the encouraging story I meant it to be.

Docs fit my soul but not my feet, which is distressing. Actually, I should try again: the last time I tried was in college, and my feet have been through it since then. I used to wear work boots, the manilla-envelope-colored kind.

Nicole said…
I think your dress with boots is perfectly lovely AND age-appropriate AND all those good things. I am all for whatever works and is comfortable. I love that outfit you posted so much. I bet you rocked the long dresses and button-up boots!
November 4, 2021 at 3:33 AM

StephLove said…
I hope the medication works for the RLS. I just fall apart when I'm not getting enough sleep. Underwear in the kitchen towel drawer would be the least of it.

Ernie said…
Oh, how I enjoyed GIRL, SAME and the dog running to the back door to fake well-behaved-ness. Hilarious. I how I love a job that makes me lose all track of time.

In my current age, I care less about my 'look' and more about the comfort of my feet, because it impacts my back. I think you look great and I love the mother/daughter full circle bit in all of this.

Angus is handsome with a mustache. Or without. Love that his name is shared with a bunny, what are the chances that said bunny came with his name?

That leg thing sounds awful. I once took Benadryl for allergies and felt that way - just restless as all get out. It was the night before we flew to a wedding and I had two little guys and I was a mess. No idea how you function that way daily. Here's hoping that whatever that doc prescribed works wonders.
November 4, 2021 at 10:00 AM